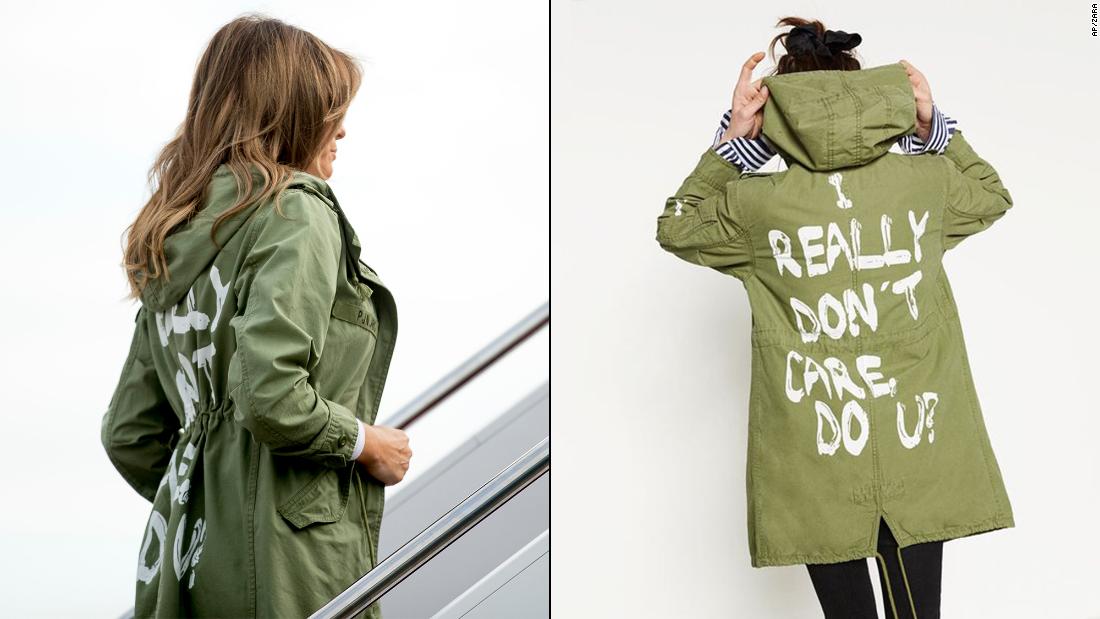 (CNN)In June, first lady Melania Trump took a trip to McAllen, Texas — one of the epicenters of the family separation crisis occasioned by the policies of her husband’s administration. Getting on and off the plane, she wore an army-green jacket with these words written on the back in white: “I really don’t care. Do U?”

It was NONE of those things — insisted Stephanie Grisham, the first lady’s spokesperson. “It’s a jacket,” she said in response to media inquiries. “There was no hidden message.”
Grisham doubled down on that nothing-to-see here message in a subsequent tweet. “Today’s visit w the children in Texas impacted @FLOTUS greatly,” she tweeted. “If media would spend their time & energy on her actions & efforts to help kids – rather than speculate & focus on her wardrobe – we could get so much accomplished on behalf of children. #SheCares #ItsJustAJacket.”
That was, of course, never true. (The headline of the piece I wrote about the jacket was “Melania Trump’s ‘I really don’t care. Do U?’ jacket was no mistake.”)
And now we know that the line Grisham was trying to sell was simply wrong. How? Melania Trump told us!
She told ABC News’ Tom Llamas that she wore the jacket “for the people and for the left-wing media who are criticizing me. And I want to show them that I don’t care.” (The ABC interview happened during Melania Trump’s trip to Africa but aired on Friday night.)

That jibes with how the President described his wife’s decision to wear the jacket at the time. “‘I REALLY DON’T CARE, DO U?’ written on the back of Melania’s jacket, refers to the Fake News Media,” Trump tweeted. “Melania has learned how dishonest they are, and she truly no longer cares!”
So, Melania and Donald Trump are now on the same page. But Melania Trump from June and Melania Trump from October are not.
At one level, this is all dumb. Who cares about the jacket the first lady wore? Did it impact in any meaningful way either her interactions with the kids separated from their parents at the border or her husband’s immigration policies? Almost certainly not.
At the same time, why not just tell the truth? Why lie about something so dumb? It’s not as though the Trumps had some great relationship with the media back in June that she was concerned about jeopardizing. Literally nothing has changed between June and now in terms of how the Trump interact with the press. They were disdainful of the media then, they are disdainful of the media now.
This reflexive response is the sort of thing that has become commonplace in this administration. Whatever the media (or the “haters) say, say the opposite. Truth be damned.