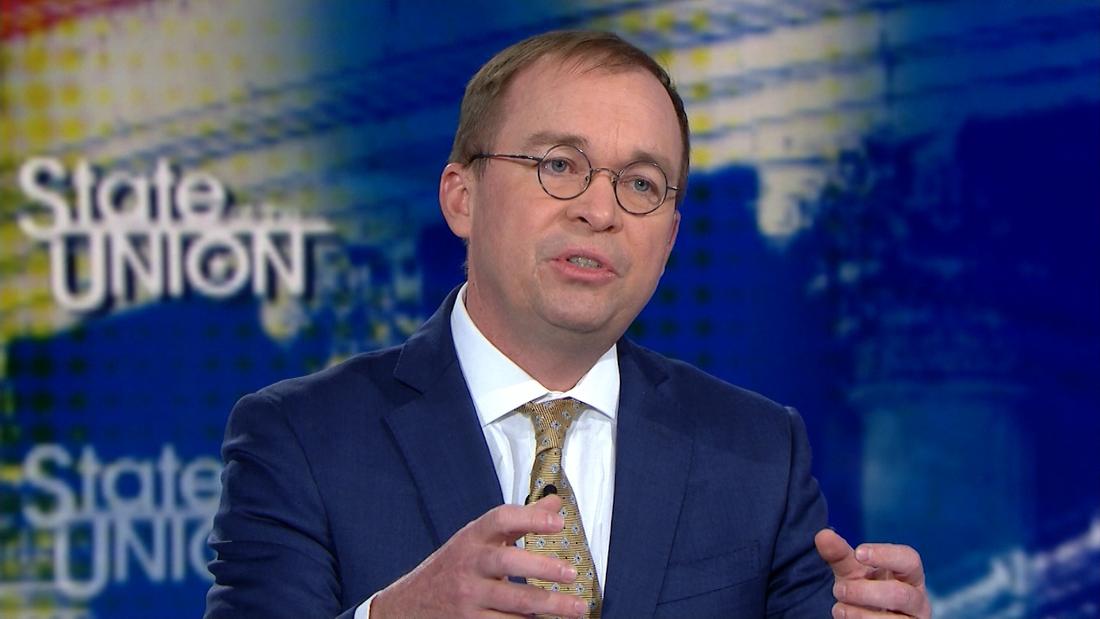 Washington (CNN)In the introduction to his new budget proposal President Donald Trump warns that the federal government “must protect future generations from Washington’s habitual deficit spending.” He then lays out a budget that makes clear he won’t be the one to curb that habit.

Just a few years ago, and with Barack Obama’s name on the front page, a White House budget like this would have had Republican heads in Washington spinning. For nearly a decade, GOP lawmakers warned about the dangers of growing deficits and national debt. Republicans took control of the House of Representatives in 2010 by riding a Tea Party wave fueled by voters angry over the financial crisis and obsessed with limiting what they saw as out-of-control government spending.
Nearly a decade later, this White House budget is as clear a sign as any that Republican budget hawks are a dying breed and that under President Donald Trump, the GOP has lost its verve for fiscal discipline.

When budget hawks ran the GOP

During the Obama era, Paul Ryan spent years presenting lean, entitlement-reforming budgets in the House, knowing they would go nowhere with Democrats in control of the Senate and the White House. Still, it was a political move to lay out priorities that Republicans would presumably enact should they ever get full control of Washington. Among those most prominent Tea Party conservatives pounding the table for significant spending cuts was Mick Mulvaney, a pugnacious Republican lawyer and state lawmaker from South Carolina.
The high point of GOP fiscal hawkishness came in 2011, when House Republicans pressed Obama into signing the Budget Control Act, which raised the debt limit of the US government in exchange for a significant reduction of the budget deficit. Those cuts eventually came in the form of across-the-board sequestration of most mandatory and discretionary spending. That satisfied some budget hawks, but the indiscriminate cuts ignored the real drivers of the long-term deficit: entitlement spending.
What a difference a few years makes. Ryan has left Congress, budget deficits have continued to skyrocket, and Mulvaney is now working for Trump as Budget Director and as acting chief of staff. Mulvaney’s nomination as Trump’s OMB director in 2017 had given some GOP senators hope that the President might be more hawkish on deficits, despite some of his campaign rhetoric to the contrary. But it looks more like Trump changed Mulvaney than the other way around.
Mulvaney has been intimately involved in crafting the White House’s annual budget proposals but for the first two years of Trump’s presidency, neither budget sincerely addressed entitlement spending. After years of Republicans blaming Democrats for being the roadblock to Medicare reform, last year Mulvaney admitted that the problem was with his new boss. “The President was not willing, because of the promises he made on the campaign trail, to deal with those entitlement programs,” Mulvaney told reporters as he presented the budget proposal in February 2018.
Rather than fight, Mulvaney got in line with the new deficit-spending Republican party, perhaps realizing that fighting was futile. “I’ve been here six and a half, seven years now. And I’ve come to the realization that we are never going to balance the budget based just on spending reductions,” Mulvaney told Yahoo Finance in October 2017. “We are not going to cut our way to balance. The attitude just doesn’t exist for that on Capitol Hill.”
Mulvaney has joined the Republican chorus that economic growth will help raise the revenue and curb budget deficits. “America’s booming economy will create increased government revenues — an important step toward long-term fiscal sustainability,” he said in a statement last October, responding to the news that the deficit rose 17% in 2018 from the previous year.

White House budget proposals are rarely worth the paper they’re printed on, serving more as mission statements or press releases than serious fiscal documents. That’s especially true when the opposition party has some power, as Democrats do know with control of the House. The best opportunity for a president to most directly influence the budget is when his party controls Congress, but those windows haven’t been open for long in recent administrations. Obama had two years with unified Democratic government before Republicans took over the House and began resisting his spending priorities. Budget politics in Washington haven’t been normal ever since.
Like his predecessor, Trump also had two years with a Republican Congress. The chance to roll back deficits presented itself, but with a President largely uninterested in deficits and Republican voters focused on immigration and health care, the GOP spent its political capital on a $2.3-trillion tax cut.
Even if Trump had been open to reforming the old-age entitlement programs, that possibility died when Democrats won back the House. Now Trump has the same problem that Obama faced, but with a new dynamic: In contrast to Republican rhetoric, Democrats aren’t opposed to government spending and will have no incentive to consider the big cuts Trump has proposed. That means spending is likely to continue rising, the tax cuts will remain in place and entitlements won’t get touched. In that world, the deficit keeps growing.

Growing our way out

That, of course, isn’t how the White House is spinning it. At Monday’s press briefing introducing the 2020 budget, acting OMB director Russell Vought echoed the confidence in growth as a deficit-buster. “We are confident that the president’s historic tax reforms, deregulation, trade policy unleashing American energy will continue our economic growth. Economic policies in this budget will generate more than enough revenue to pay for the costs of the tax cut,” Vought said.
Even so, there is evidence the economic boom the administration is counting on could be slowing. A recent survey of companies suggested the impact of the tax cuts on job growth was illusory, and Federal Reserve chairman Jerome Powell suggested late last year growth could be “softening.” Economic growth has climbed down from its peak of 4.2% in the second quarter of 2018 down to 2.6% in the fourth quarter of 2018 — roughly where GDP growth was a year earlier.
The new White House budget does propose some changes to Medicare that cuts spending by $845 billion over the next ten years — less than 15% of what the program is expected to spend over that time. But Vought made clear the administration’s position on fundamental reforms to the program.
“Medicare spending will go up every single year by healthy margins and there are no structural changes for Medicare,” said Vought, who also blamed Congress for not curbing discretionary spending in recent years — a time, it should be noted, Republicans were in charge on Capitol Hill.
Yuval Levin, the editor of the policy journal National Affairs and a longtime conservative advocate for entitlement reform, offered faint praise for the White House’s gestures toward changing Medicare. “These are pretty standard presidential budget proposals of the sort you’d see from a president of either party at this point,” Levin told CNN. “They have proven politically unfeasible for a long time, but it’s still good to see the administration put down a marker that they do care about containing costs in these programs.”
But as Republicans showed throughout the Obama years, talk of cutting the deficit is cheap. Following through, on the other hand, commands a price Washington still isn’t willing to pay.