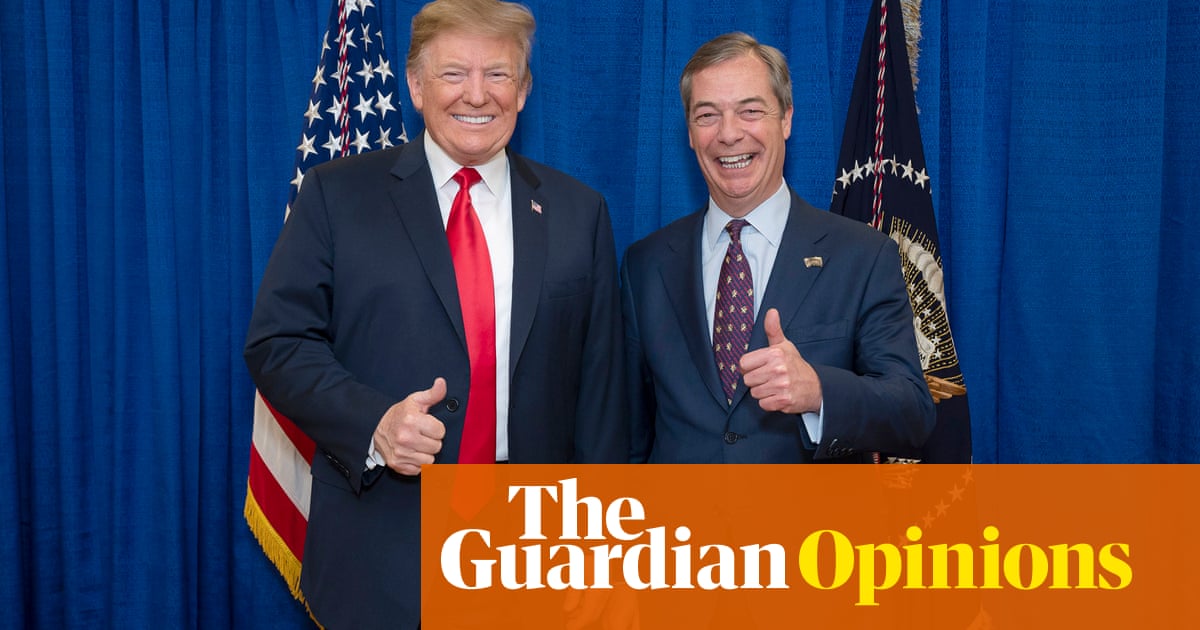 If Brexit is halted, both the UK and the rest of Europe will reap the benefit and Donald Trump, for one, will suffer a defeat. The sect of Brexit has passionate adherents far beyond Britains hardline leavers. It includes vocal and influential preachers in the Trumpian world of Washington and the reality of Trump is having a deep impact on Europe, with the Brexit mess a key part of it all.

The Brexit saga isnt just about a negotiation gone awry, nor about the impasse a country finds itself in having fallen prey to a movement based on lies and deception. The wider question is about what kind of world we want to live in. To fully see this, it helps to keep Trumps US in mind, not just the intricacies of British parliamentary arithmetic or Michel Barniers latest statement. Because Trumps US is intimately intertwined with the Brexiter vision of Britain.

A few weeks ago, in Washington, I decided to plunge into the world of hard Brexits American allies and theoreticians. For a continental European like me, attached to the EU and to a values-based transatlantic relationship, it felt like a parallel universe. I sat down with Ted Bromund of the Heritage Foundations Margaret Thatcher Centre for Freedom. The Heritage Foundation is an American conservative thinktank that rightwing British advocates of Brexit have long had close ties with. In 2016, with the vote for Brexit and the election of Trump, it became a beehive of people who suddenly felt empowered. Trumps messaging on Brexit (he favours no deal), as well as his 2017 Warsaw speech redefining the west along white nationalist lines, were music to their ears.

Thinkers such as Bromund and Jakub Grygiel, a professor at the Catholic University of America in Washington DC, are a good illustration of the nexus connecting Brexit, Trump and Europes current predicament. (Grygiel, according to some Washington insiders, could become Trumps anti-EU man, having served as an adviser to Wess Mitchell, US assistant secretary of state for European affairs until February 2019.)

What I took away from my conversation with Bromund and from reading Grygiel is this: first, the pro-Trump crowd still sees Brexit as an essential step towards the unravelling of the EU, an entity that, writes Grygiel, has outlived its purpose as an ordering force in Europe. The reasoning behind that assessment lies not only in an evaluation of Europes weaknesses but also, paradoxically, in a fear that the EU may one day build itself up as a tentative counterweight to Trumps US: It is time for us to recognise that the EU is an open and declared enemy to the role the US assumed in Europe after 1945. (Thats Bromund.)

At the root of this is an ideological angst that the US may lose some of its clout in the global great power competition if the EU were to get its act together. Bromund lambasted Germany for being the USs worst ally, not least in its energy policies alongside Russia, and suggested that if the EU did ever find a way to curb Chinese influence (for example through the screening of investments), that capacity would soon enough be put to use against US interests as well.

He was much more worried about the anti-American sentiment found in Italys Five Star Movement (a hodgepodge of left- and rightwing populism) than about democratic backsliding in Poland and Hungary. This adds up to an understanding of the EU and its principles as something that the US would do well to undermine. Postwar US policies that propped up the club for decades have lost their rationale. Brexit, then, is seen as helpful in depriving Europe of any leverage to act (whether on the climate crisis or on multilateralism at large) in ways that might contradict a specific, narrow understanding of US national interests.

If Brexit isnt somehow stopped, the Trumpian-Brexiteer axis will come to determine much of what unfolds in our part of the world and it wont be pretty. Fretting about how a British decision to remain in the EU might affect the distribution of seats in the next European parliament seems rather less urgent by comparison.

Bromund spent time in the UK around the time of the 1992 Maastricht treaty. While researching a dissertation on Britains attempt during the 1960s to join the European project, he came to the conclusion that Europe had all along been a political project, not a strictly economic one. Now hes in favour of a no-deal Brexit, under the current circumstances, he told me.

Many Europeans, not least in the central and eastern parts of the continent, seem more worried about losing traditional US protections for their countries than they are about Brexit. But both these issues are relevant to the Trumpian desire that the EUs ability to define its own future should be diminished. When I asked Bromund what his ideal vision for Europe was, he spoke of an imaginary past in which an earlier stage of EU development miraculously coincided with a unipolar world run by the US. Revert to the 1980s, he said, except with the US having won the cold war.

In his 2005 book Postwar, the historian Tony Judt reflected on how a gap could emerge between the US and Europe over societal issues (such as the death penalty). Of course he couldnt then anticipate Brexit or Trump. Ideological hatred of the EU in parts of Washington and Britain is already producing a deep gap. A submissive Europe, and an even more submissive Britain, beholden to Trumps dangerous worldview, is what ideologues in the US hanker for. A country cutting its moorings in Europe will fall prey entirely to Trump. And Europe will be the weaker for it.

Natalie Nougayrde is a Guardian columnist