Seth Meyers: Trump ‘creates myths about himself until the truth comes out’ 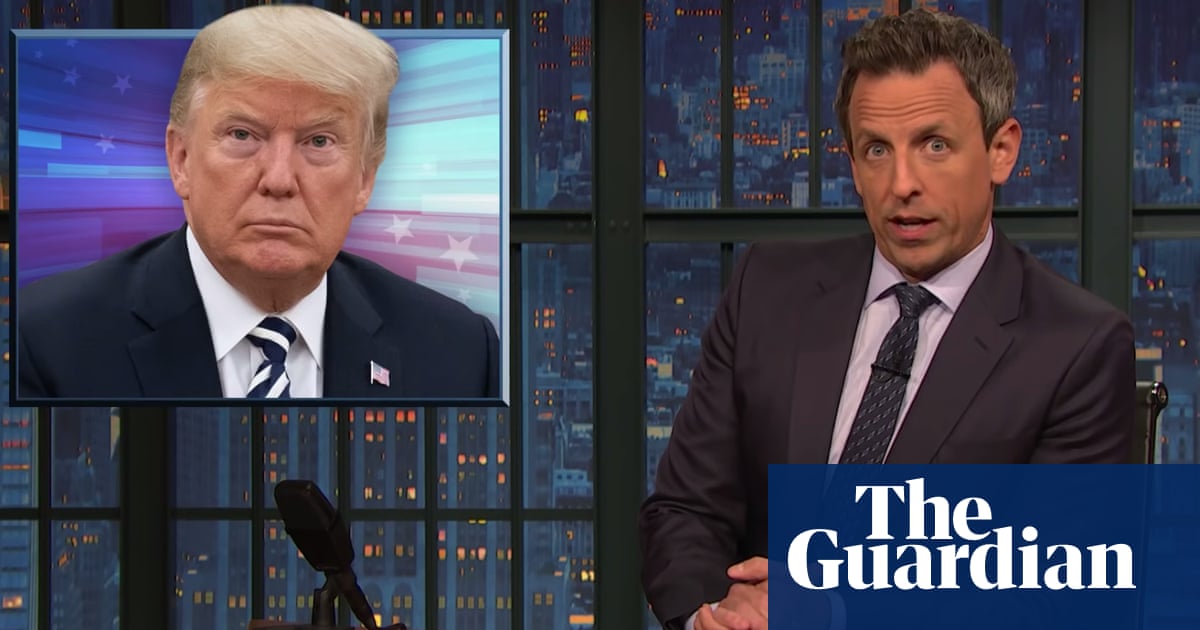 Late-night hosts focused on Trumps trade war with China and the ongoing problem that is Rudy Giuliani.

On Late Night with Seth Meyers, the host took a closer look at the recent events of the Trump administration. Meyers first touched on Trump trying to cozy up to the Hungarian prime minister, Viktor Orbn, a far-right strongman who has chipped away at democratic liberties during his time in office, who Trump has described as highly respected, doing a tremendous job and a little bit controversial, like himself. Meyers attacked this characterization: A little bit controversial is not how you describe a wannabe dictator. Thats how your aunt describes 50 Shades of Grey.

Meyers then shifted to discuss the brewing trade war between China and the United States. Trump has insisted the US economy will be fine, despite economists disputing this. Meyers explained that this is Trumps way. Trump casts himself as a master dealmaker but what were learning yet again, is that hes actually terrible at making deals. This is what Trump does: he creates myths about himself until the truth comes out. To illustrate his point, the host turned to a recently published story about Trumps constant cheating at golf, zeroing in on one story, after Trump was inaugurated, where Ted Virtue and his son were challenged by Trump to play for the club championship, only to have the ball switched by Trump. On stuff as big as trade or as small as a ball hit in the water, he makes you question your sense of reality. Hes like a guy who only kind of knows how to Jedi mind trick you. But instead of actually convincing you, he just keeps saying it until you get irritated and give up.

Meyers added that Trump had joined the GOP, which also plays by unfair rules. The former New York mayor Rudy Giuliani planned to go to Ukraine to dig up dirt on the Russia investigation and Joe Biden. Giuliani has admitted somebody could say that its improper. The Late Night host took the bait, saying: All right, Ill say it. Its improper. Meyers continued: The best thing about Rudy is he just admits everything. We probably wouldnt have needed the Mueller report if we had just given Rudy a podcast.

Stephen Colberts Late Show monologue focused on the trade war brewing between China and the United States. With the Dow plunging 617 points due to the breakdown in negotiations, China has refused to change laws covering intellectual property, forced technology transfer and subsidies, and the US government has backed away from the negotiations. The Chinese government has also objected to publication of the details, preferring a summary. Colbert poked fun at this: Oh, really? The White House is upset because China wants to release a summary? Then the host impersonated Trump, saying: No. No way, Xi. I know how summaries work, OK? Its going to be four pages long and a bucket of lies. Trump has claimed the economy is strong enough to withstand any fallout from tariffs. Colbert called him out on this, saying: Spoiler: Trump is lying.

Fox News Chris Wallace also tried to explain to White House economic adviser, and last living California raisin, Larry Kudlow the US consumers would be the ones paying the cost of this trade war. Kudlow tried to change the narrative by saying both sides will pay the effects, then tried to to get the anchor to use the term trade negotiation instead of trade war. Colbert scoffed at this, No, you cant. Nice try, though. I know why you want to change it, because it makes it seem less dangerous. Theres a reason no one went to see Avengers: Infinity Negotiation. Later, Trump doubled on the claim repeated by the adviser, Their is no reason for the US Consumer to pay the Tariffs Colbert pointed out the grammatical error in the tweet, saying: There is no reason to use that their in that there sentence. Colbert then joked he did not understand the full ins and outs of economics, I understand economics as well as Donald Trump does. I bet if I tried, I could lose $10bn.