Trump arrives in Japan eager for flattery and pomp 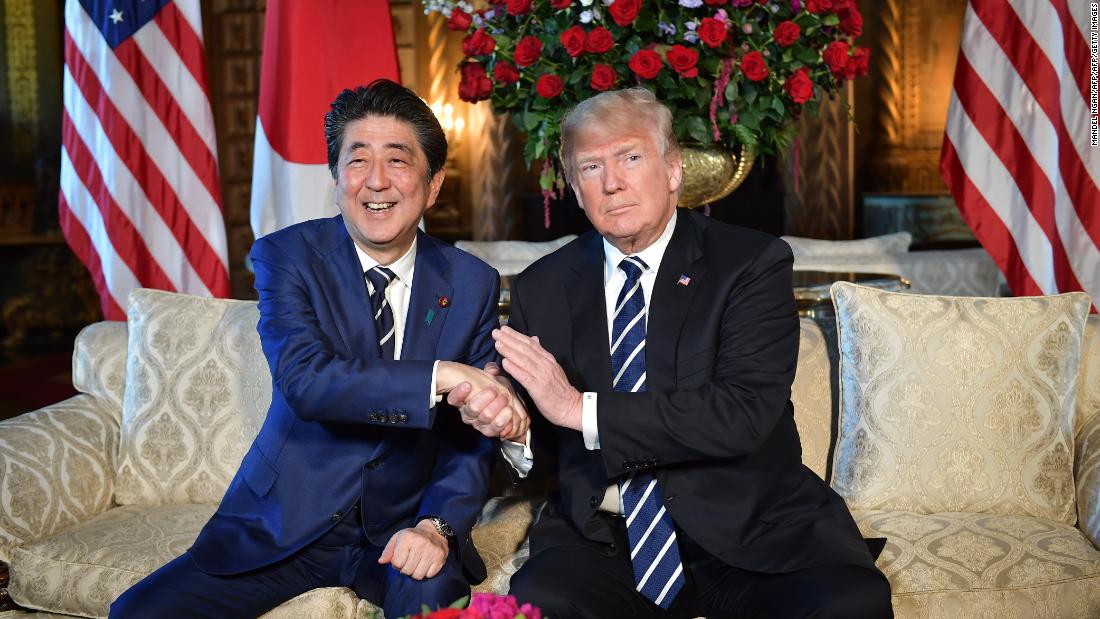 Tokyo (CNN)President Donald Trump arrived in Japan on Saturday eager for a visit salted with flattery and pomp particularly as he escapes a hostile political environment back home.

“Japan has had a substantial edge for many, many years but that’s OK,” Trump said during short remarks. “We’ll get it a little bit more fair.”
Earlier, Air Force One touched down at Haneda International Airport just before 4 a.m. ET (5 p.m. local) after a roughly 14 hour journey from Washington. Trump’s series of engagements with Prime Minister Shinzo Abe and Emperor Naruhito begin Sunday.
The state visit will provide an altogether more pleasant vibe than in Washington, where talk of impeachment is now rampant and Trump is seething at Democrats’ investigations into his administration.
And though Japanese officials and analysts said the honor of an inaugural state visit would have been afforded any US leader, it still reflects a bid to charm a flattery-prone President who still finds himself besieged by investigations back home. The trip kicks off an intensive schedule of foreign travel that will take Trump to Europe and then back to Asia over the next month.
In the Japanese capital, ringside seats at a sumo wrestling tournament, an imperial dinner banquet and a visit to a naval base are being arranged by Abe, who has spent more than two years making a crack at becoming Trump’s best global friend.
On that front, he’s largely succeeded. As other traditional allies in Europe and Canada find themselves politically weakened and successively insulted by Trump, Abe has met and spoken by phone with the President more than 40 times and has been twice invited to the Mar-a-Lago estate in Florida.

Trade and North Korea on the agenda

The payoff for Abe’s courtship is less clear. Trump, whose views of Japan as an economic rival date to the 1980s, has slapped metal tariffs on the country’s exports and threatened duties on its autos. And his diplomatic effort with North Korea has at moments caused deep concern among Japanese officials.
Both those topics will be featured in Trump’s talks with Abe this weekend. But US officials said substance would take a back seat to the lashings of ceremonial Japanese culture meant to impress and flatter the US leader. Trump is the first state visitor since new Japanese Emperor Naruhito ascended to the Chrysanthemum Throne this month following his elderly father’s abdication.
The Emperor and his Harvard-educated wife, Empress Masako, will host Trump for an imperial banquet designed to illustrate strong US-Japan ties, which are critical in a country dependent on Washington for military protection. Trump will also present the winner of Tokyo’s spring sumo wrestling tournament a trophy after taking in a few rounds from ringside seats, an engagement that White House officials say he’s been anticipating eagerly.
The trophy Trump will present is about 54 inches tall and weighs 60-70 pounds, according to a senior White House official.
The trophy is called the “President’s Cup,” the official said.
While the effect will be one of royal feting of a leader who loves that sort of spectacle, it was never a question whether a US leader would be invited for the first official state visit of the Reiwa era, as Emperor Naruhito’s reign is known.
“It had to be the American president first,” said Michael Green, senior vice president and Japan chair at the Center for Strategic and International Studies in Washington. “It’s more about that than showing Donald Trump a lot of pomp and circumstance. The Japanese diplomatic agenda meant that whoever was president, they had to have the American president first.”
In extensive face time with Trump — including a bilateral meeting and likely a round of golf — Abe hopes to stave off further trade tensions and gain assurances that the US will remain tough on North Korea.
Japanese officials were alarmed earlier this month when North Korea resumed test-firing short-range missiles after a long period of relative silence. While Trump and other US officials took a middle-of-the-road approach to the tests, saying the diplomatic relationship with leader Kim Jong Un would continue, Japan took a harder stance, saying the move violated UN resolutions.
On Saturday, the US appeared to move closer to Japan’s stance. US national security adviser John Bolton told reporters the short-range missile tests did violate UN resolutions, according to Reuters, a first for a US official in describing the recent events.
Abe has regularly pressed Trump to maintain pressure on Pyongyang, particularly on the matter of Japanese citizens who were abducted by the regime decades ago. And while Tokyo does not oppose the President’s diplomatic efforts, there are lingering concerns that the pursuit of a nuclear agreement could lead to a withdrawal of US troops from the region.

‘A celebration of their new roles’

Trade, too, has provided heartburn for Abe in his dealings with Trump. The US withdrew from the 12-nation Trans-Pacific Partnership early in Trump’s tenure, which Japan had advocated for as a trade bloc that could provide a counterweight to China. Instead, Trump stated a preference to negotiating one-on-one trade agreements, including with Japan.
Last week, Trump decided to delay new auto tariffs as his administration negotiates bilateral trade agreements with Japan and Europe — but only for six months, a tight deadline for the two sides to reach an agreement that suits him.
Even as he lifted tariffs on steel and aluminum from Canada and Mexico last week, Trump has maintained those tariffs on Japanese metals. Trump has insisted the trade deficit with Japan be lowered, and he carries a long-held view of the country as a fierce economic rival (he took out a full-page newspaper ad in 1987 declaring “Japan and other nations have been taking advantage of the United States”).
He said in his remarks Saturday he was looking to instill the US-Japan trading relationship with “fairness and reciprocity.”
Those disputes aren’t likely to be entirely resolved this week, officials said in previewing the trip, though Trump said on Saturday the two sides were “getting closer” to striking a deal.
“I don’t think that the purpose of this trip is to focus on trade. It’s really to be state guests of their majesties. And that’s really the heart of the visit,” a senior administration official said. “It’s a celebration of their new roles and this new era that’s been kicked off, the Reiwa era. And a chance to celebrate the alliance.”