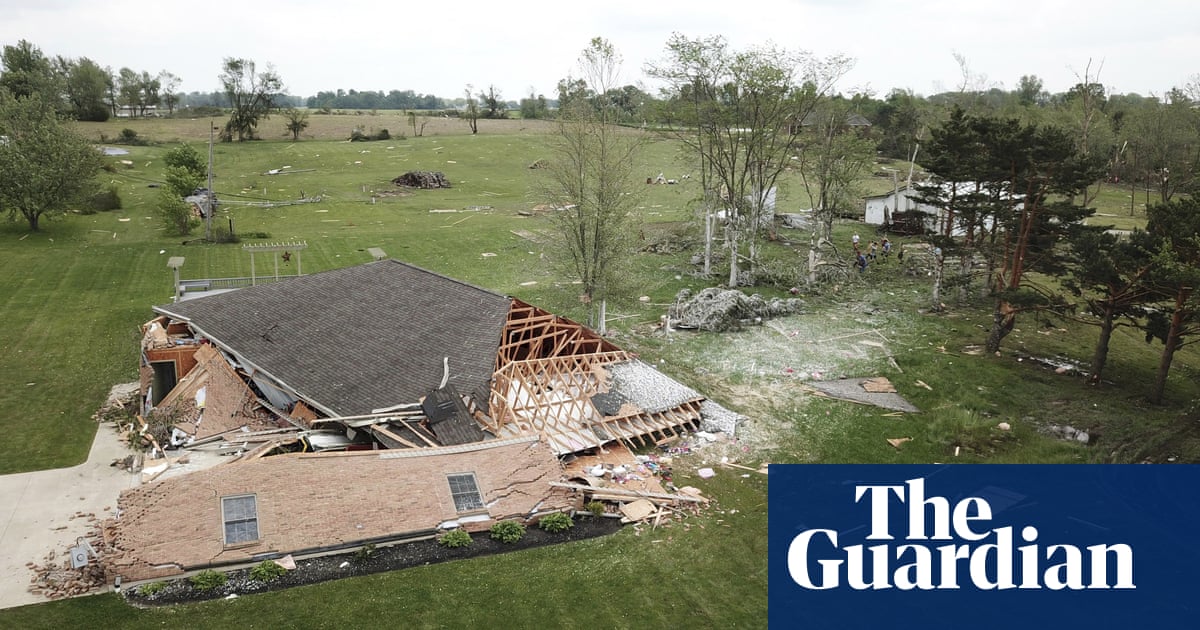 The sun is finally shining in Indiana and the farming community is frantic. The ground is sodden. Storms and worse have swept the corn belt this spring. Memorial Day, the official start of summer, was marked by tornadoes and hail.

Angie Williams and her father Bruce have just started planting on their 1,000-acre farm in Avon, Indiana. My dad is 64 and he has never seen a situation like this. We have neighbors in their 80s who have never seen anything like this, she said.

Its 4 June. Usually they would be done by 10 May. Well be operating at a loss this year, she said.

And its not just the dire and turbulent weather that Indianas $25bn agriculture sector has to contend with. Farmers are caught up in a political storm too. Already exports of soybeans to China have all but dried up thanks to the Trump administrations ongoing trade dispute with Beijing. Now Donald Trump is also threatening to escalate its trade war with Mexico, a major buyer of Indiana corn.

Trump has threatened to impose a 5% levy on Mexican imports starting next week and has said the fees could rise to 25% unless Mexico does more to stem the flow of migrants trying to cross into the US. Mexican officials are in Washington trying to head off the tariffs.

I understand what the president is trying to do, said Williams. I support him, I just wish it didnt affect us so personally.

Trumps Mexican standoff has Republicans worried too. Republican senators who have shown little appetite for taking on Trump have come out firmly against the proposal. I will yield to nobody in passion and seriousness and commitment for securing the border, Senator Ted Cruz told reporters this week. But theres no reason for Texas farmers and ranchers and manufacturers and small businesses to pay the price of massive new taxes.

Trump for his part has said his party would be foolish to try to stop him.

All this uncertainty has farmers rattled, said Bob Nielsen, professor of agronomy at Purdue University, as they contend with a potentially disastrous planting season. This is the slowest planting season I have seen in 37 years, he said. By now farmers have usually planted 90% of their crop but the average across the state is around 31%, he says.

With better weather and a late harvest farmers could still recover from this late start but if Trump follows through with tariffs on corn that would have a very big impact, he predicted.

Its not just Indianas farmers who are worried. The state helped put Trump in the White House in 2016 and has seen its unemployment rate drop to just 3.6% since his election. But the trade disputes are worrying manufacturers, said Andrew Berger, senior vice-president of governmental affairs at the Indiana Manufacturers Association.

The biggest fear is that the replacement for Nafta [the North American Free Trade Agreement] will be disrupted, he said.

The US, Canada and Mexico are currently trying to ratify Naftas replacement, the United States Mexico Canada Agreement (USMCA). Trumps new tariff threat is heightening concern that the deal will collapse, adding yet more uncertainty for businesses in the region.

Mexico was Indianas second largest export market in 2018 behind Canada and is far more important to the state than China. On top of that Indiana imported $4.5bn worth of goods from Mexico in 2018. A 5% tariff would add $226m to those imports, 25% would add $1.1bn. Indianas economy may be humming, said Berger, but Mexican tariffs would hit us immediately.

Perhaps the worst part of the problem is it doesnt even have anything to do with trade its about immigration. Thats not an easily solvable issue, he added.

Manufacturers are hoping this is a bluff. Theres a lot of skepticism about the seriousness of this, frankly, Berger said. There is a feeling that this is just a tactic to get [Mexicos] attention.

But like the Indiana weather its almost impossible to predict what will happen next. We just feel like we are caught in the crossfire, said Williams as she headed out to her fields for another 18-hour day.