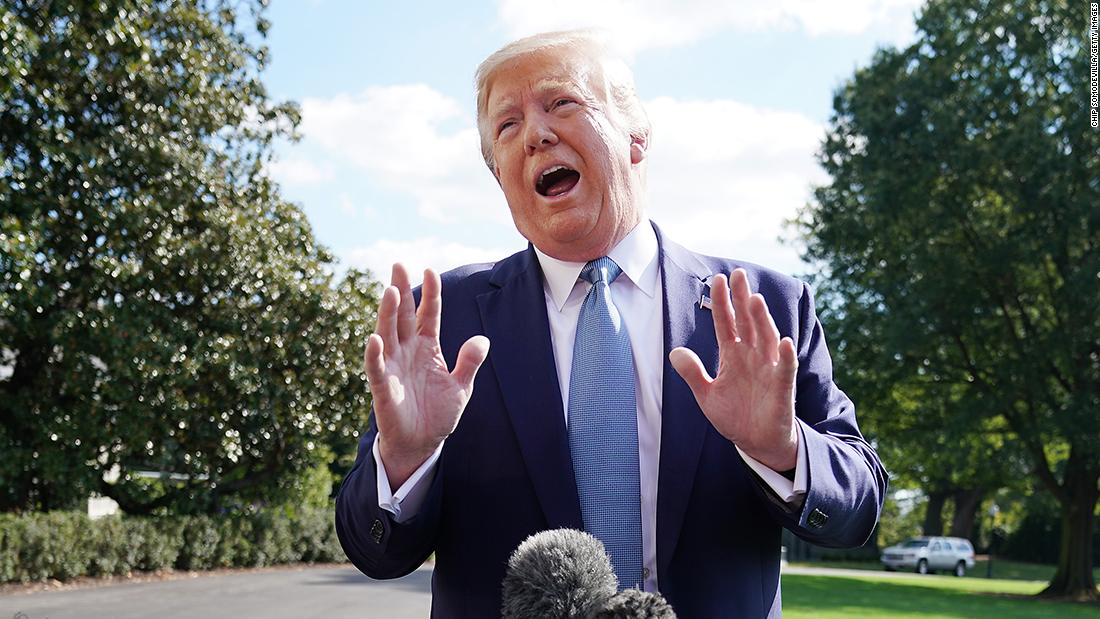 Rather than contest the facts Democrats are assembling in their impeachment inquiry, he’s essentially conceding many of them — and daring Speaker Nancy Pelosi’s team to convince America that the evidence really amounts to a case for removing him from office.
The President is putting all his chips on the table. “Trump is betting that Americans will become so accustomed to his transgressions that they will become immune to outrage; that they will inoculate him against impeachment,” wrote Frida Ghitis. His invitation to China to investigate Biden was an even worse offense than asking Ukraine, she added.
“This time, Trump was asking not a friendly country, but a top geopolitical foe of the United States to interfere in America’s elections, an even more jaw-dropping affront to the responsible conduct of US foreign policy,” Ghitis wrote. (For the latest updates on the impeachment battle, sign up for CNN’s new Impeachment Tracker Newsletter.) 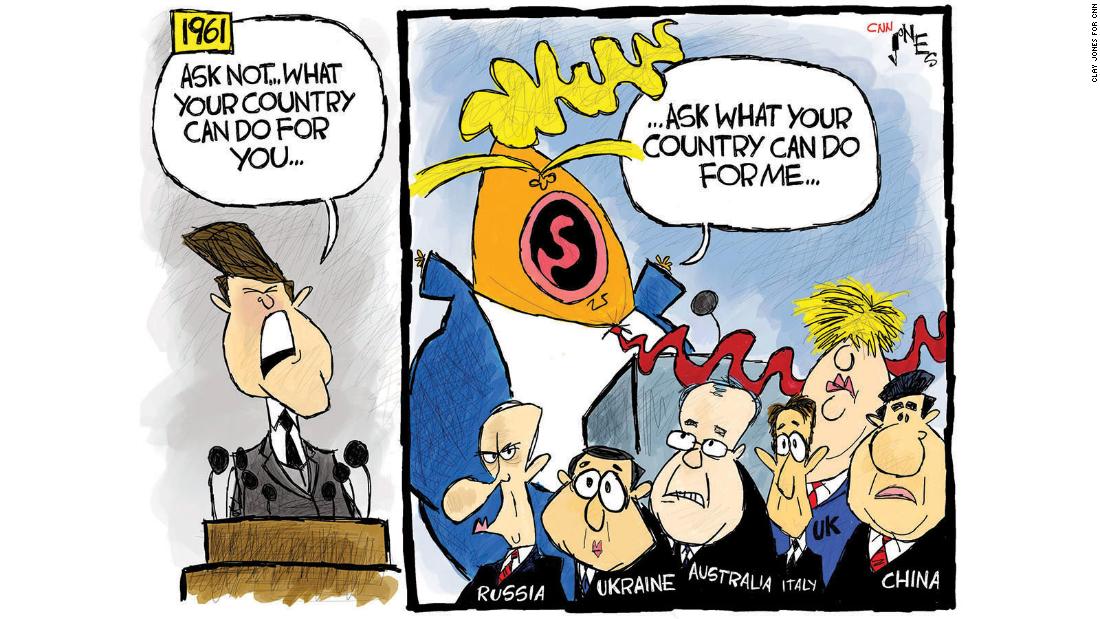 Almost everything Trump is doing goes against the advice offered by Paul Begala, who helped President Bill Clinton win his impeachment fight: “The more Trump talks, the more he confesses, covers up, opens new areas of inquiry, or pulls the rug out from under his previous defense.”
What should Trump be doing? “Focus on the American people’s problems, not yours…Clinton told the country he was getting up every morning and working on their problems. And he was. Even with a GOP House that was impeaching him, and a GOP Senate, he passed legislation to double Head Start.”

Trump argues he has an absolute right to urge other countries to investigate “corruption.” But, of course, it is his focus on Biden — without any actual evidence of corruption — that is the flashpoint.
Four historians delivered a verdict: “In the history of American foreign relations, we are unaware of any prior case — in 230 years — of a president asking a foreign leader to intervene in American domestic politics,” something Trump has now done multiple times. “No one knows if Congress will decide that these actions rise to the level of impeachable ‘high crimes and misdemeanors.’ We do know history will judge them harshly, because Donald Trump is not fulfilling the most solemn duty of every president: to protect the nation’s security.” 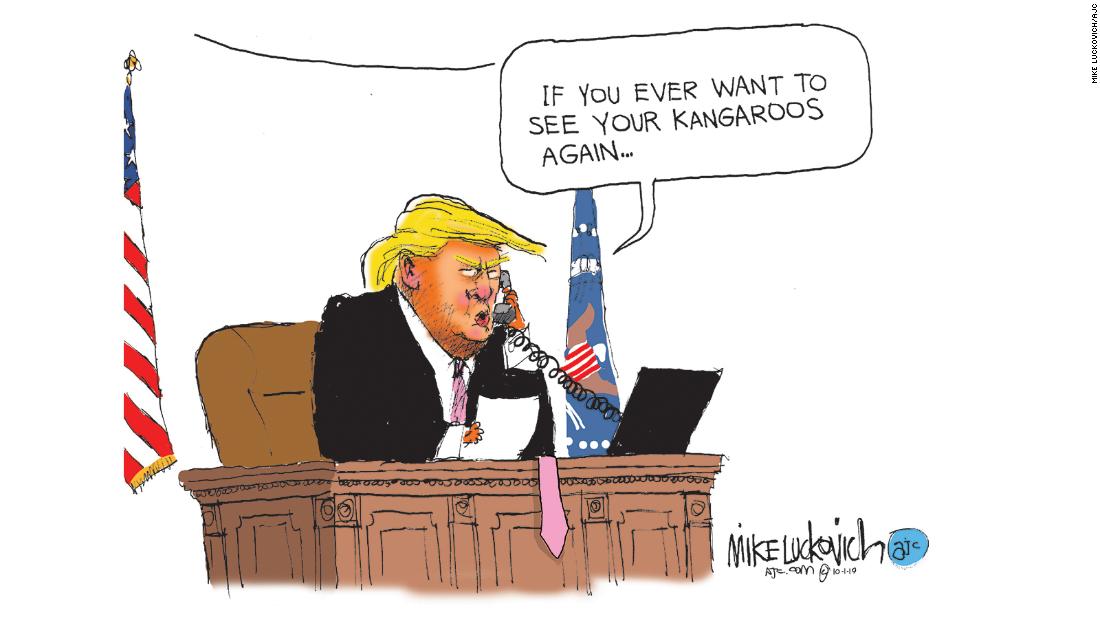 In the New York Post, Rich Lowry wrote that there’s nothing wrong with Trump asking foreign leaders such as Australia’s prime minister to cooperate with Attorney General William Barr’s investigation of the Russia probe’s beginnings. “The Russian story … offered Democrats the hope of deliverance from a president whose election they never truly accepted,” Lowry wrote. “When Robert Mueller didn’t have the goods, House Democrats were at sea for a while, until Trump’s call and the whistleblower complaint brought impeachment deliciously back into play. Ukraine is more an epilogue of the Russian investigation than the beginning of a new book.”

Defenders of Trump might write off the impeachment inquiry as another seemingly existential threat to the real estate tycoon that he will manage to dodge, wrote Sarah Isgur. Early polls, though, have bad news for Trump. “Republican voters aren’t as quick to dismiss the whistleblower’s allegations as they were to move on from the Mueller Report or the ‘Access Hollywood’ tape,” she wrote.
Harry Enten noted, “Americans are more eager to impeach Trump now than they were at similar points in the impeachment sagas of Bill Clinton and Richard Nixon.” 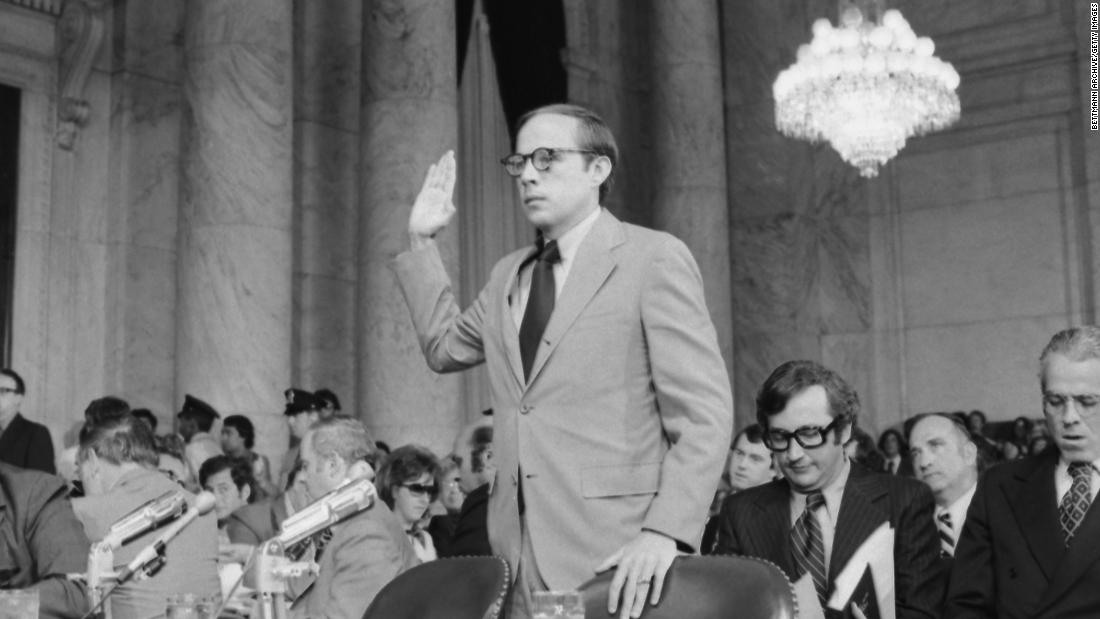 The Watergate scandal blew wide open in 1973 when White House counsel John Dean revealed Nixon’s effort to cover up the facts.
After a stream of death threats against Dean, the Justice Department provided US marshals to protect him for 18 months. “Those marshals were consummate professionals, and I am sure their successors are, too,” Dean wrote for CNN Opinion.
Now the same needs to be done for the whistleblower in the Trump impeachment inquiry, he said: “It is difficult to imagine a more important federal witness than one who testifies in an impeachment proceeding. That witness needs to be protected.”
The whistleblower has become a target for Trump and his allies, wrote Elie Honig, “Trump has claimed that the person or people who gave information to the whistleblower are ‘close to a spy’ and longingly noted that ‘in the old days … we used to handle it a little differently than we do now’ — referring, not so obliquely, to executing disloyal spies. To be clear: The President of the United States has publicly suggested punishment, up to and including execution, for members of our own intelligence community who provide information about potential wrongdoing through established, lawful channels.” (And Elie is answering your impeachment questions here. ) 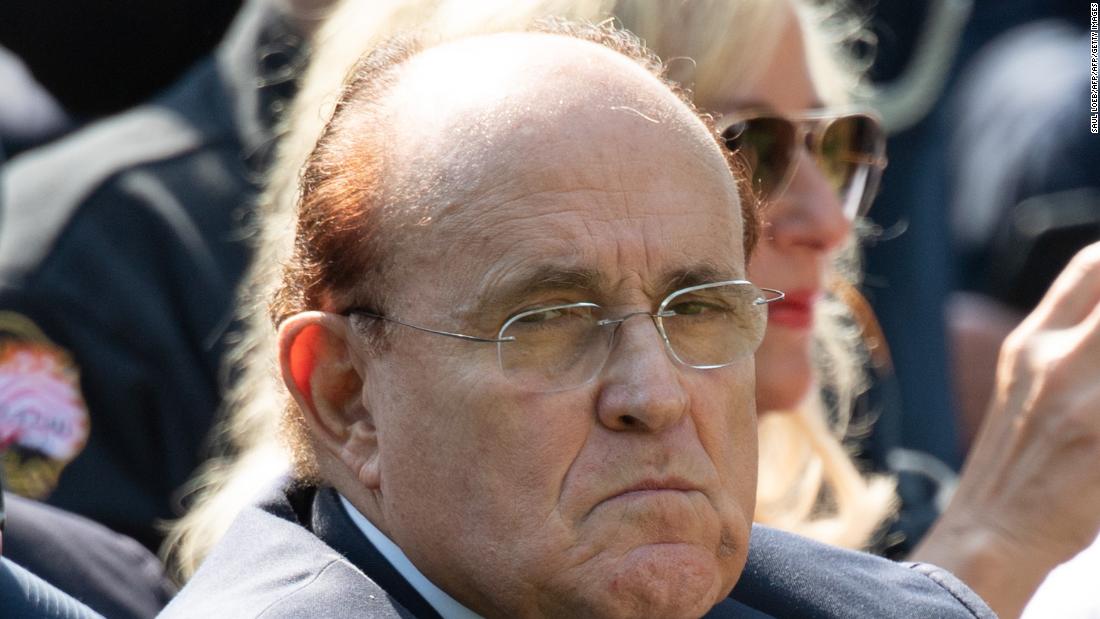 “The Rudy Show is a hot ticket,” John Philp wrote. “It’s a mesmerizing, wild-eyed performance that invites an inevitable question: What happened to Rudy?” Philp is well positioned to answer that. He co-wrote and directed the 2003 documentary, “Rudyland,” all about the man who became known as “America’s mayor” for a time after 9/11 — and who now has his fingerprints all over the Ukraine story.
“Giuliani’s antics, while striking most decent people as utterly insane, will feel sadly familiar to anybody who’s watched his career closely,” Philp observed. “Giuliani, an opera buff, has made his time on the public stage an endless aria of political pettiness, braying self-aggrandizement and ethical and personal turmoil. Only the settings change.”
“The Rudy we see today, with his showstopping mix of conviction and incoherence, is the same Rudy we’ve always had. The only thing new is his predicament.”
Calling him an “international man of mystery,” Asha Rangappa said Giuliani may try to duck questions from Congress, saying he is protected by attorney-client privilege. But it might not work: “The crime-fraud exception states that the attorney-client privilege cannot be used as a shield for potentially illegal activity,” Rangappa wrote. 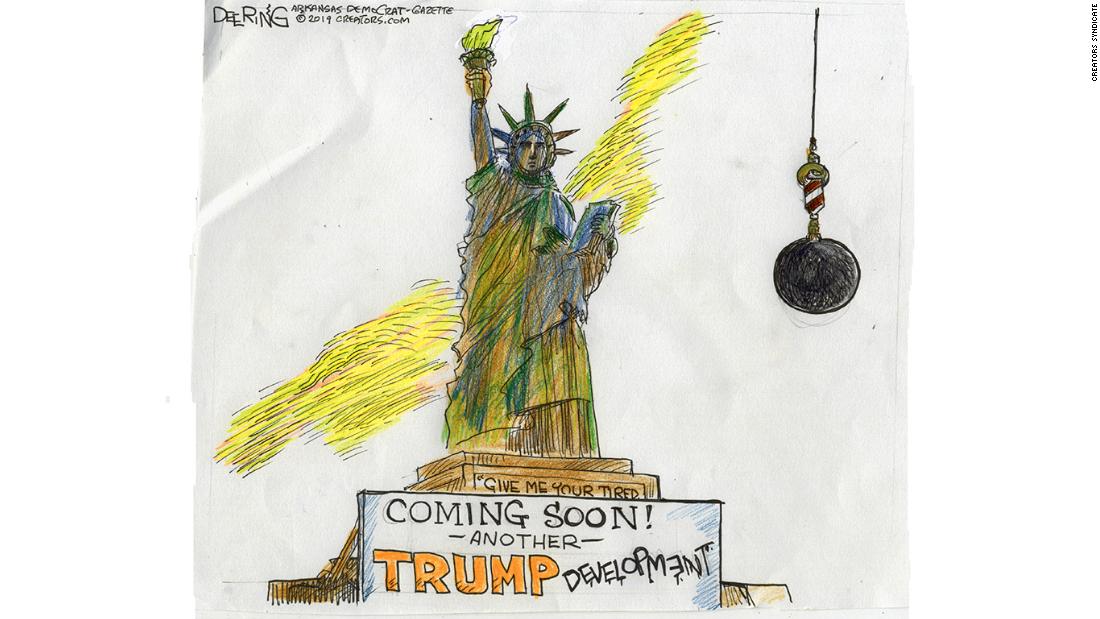 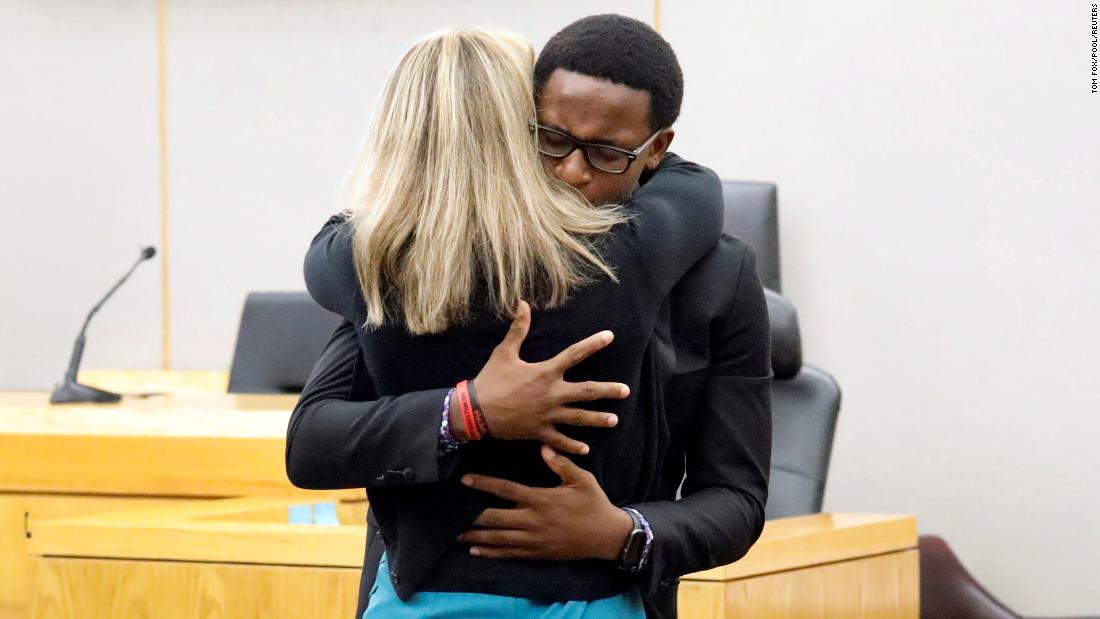 Botham Jean, a 26-year-old Dallas man, was at home eating ice cream one night last year when a police officer “walked in his front door and murdered him,” wrote Jill Filipovic. The now former officer, Amber Guyger, was convicted and sentenced last week to 10 years in prison. “What this guilty verdict may at least show is there are some lines even white police officers can’t cross when killing unarmed black people,” Filipovic wrote.
Many Americans were taken by the embrace of forgiveness Jean’s 18-year-old brother, Brandt Jean, offered Guyger during her sentencing. “I get why others only felt inspiration, and were moved by such a selfless act,” wrote Issac Bailey. “The faith that moved Brandt Jean to say those words is the faith that convinces me to hold onto the idea of redemption for all, even those who do dastardly things.”
Even so, he added, “Brandt Jean and his family had every right to be angry. But had he expressed that black anger, many in white America would not be celebrating him today. Heck, had Brandt Jean decided to silently, peacefully kneel in the middle of the courtroom instead of hugging Guyger, I have no doubt that much of white America would have written him off as just another ungrateful, unpatriotic black man– the way they have Kaepernick.” 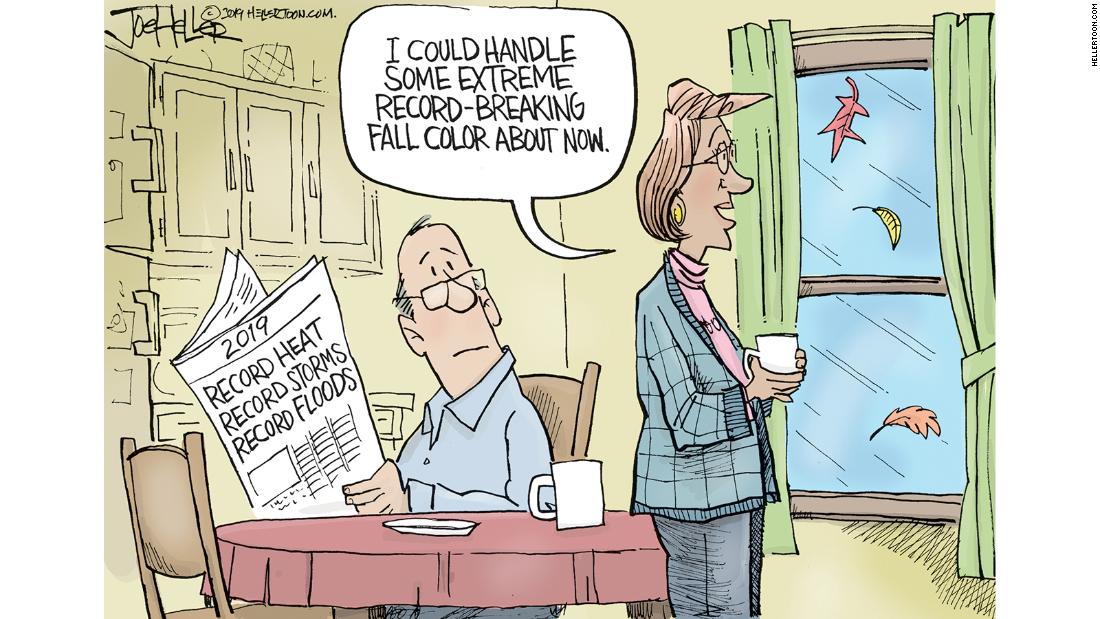 Kamala Harris: The smart way to change our marijuana laws
Douglas Rushkoff: Why Mark Zuckerberg thinks a President Elizabeth Warren would ‘suck’
James A. Gagliano: Mourning Sandeep Dhaliwal, the pioneering Sikh sheriff’s deputy killed in Texas
Roxanne Jones: Why Diahann Carroll was my first girl crush
Steve Bullock: A crazy idea to get things done in Washington
Peter Bergen: Khashoggi’s murder — one year ago — tells us much about Trump’s close ally
Kermit Roosevelt and Ruth-Helen Vassilas: Supreme Court justices should have term limits
Judith Resnik: Degrading strip search of 200 women prisoners cries out for courts to act
W. Ralph Eubanks: Jessye Norman was a diva whose voice could not be denied
AND: 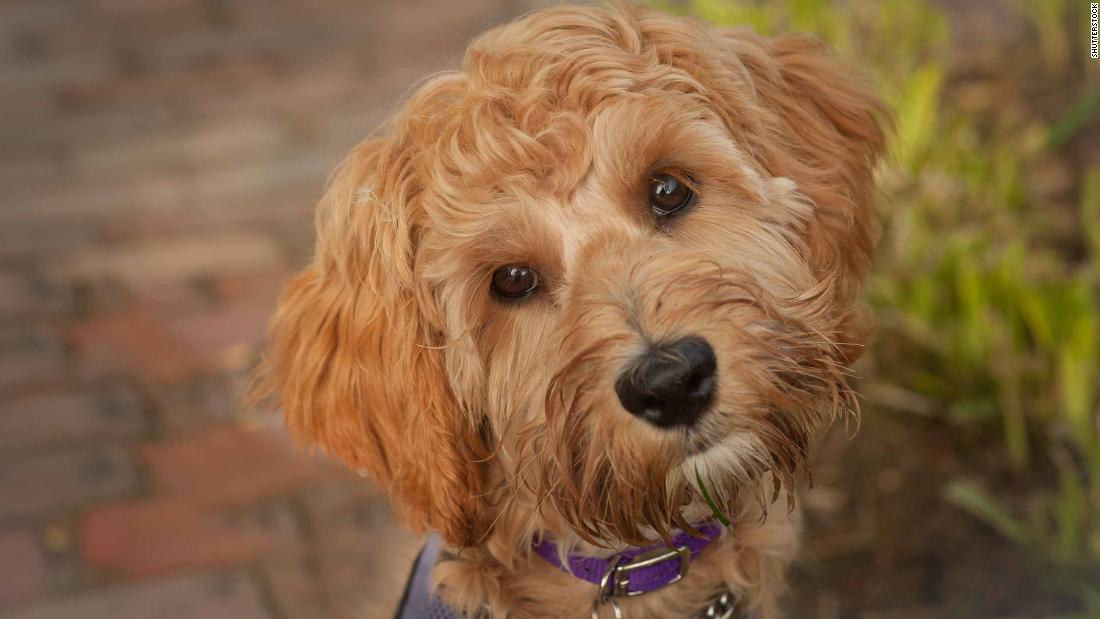 Wally Conron, the breeder of the first named Labradoodle, would like to take back what he now calls a “gimmick,” wrote Alexandra Horowitz. He worries that he “created a monster.” And he’s on to something, she noted.
But the point applies more broadly: “The rise of pedigree dog-breeding prioritized looks over function and the result are the genetic problems we see in so many breeds today.” The standards used to breed bulldogs for example, “led to a dog with such a short nose that they have severe problems breathing in the heat, or with even the least amount of exercise — which includes ‘walking.'”
“Interestingly, by cross-breeding dogs, as with the oodles, the genetic problems purebred dogs face can be eliminated, if one continues cross-breeding (as usually does not happen in oodle breeding). Over generations, we’d wind up with a new dog, one likely to be less crazy and healthier. We’d wind up with my favorite dog — the mutt.”