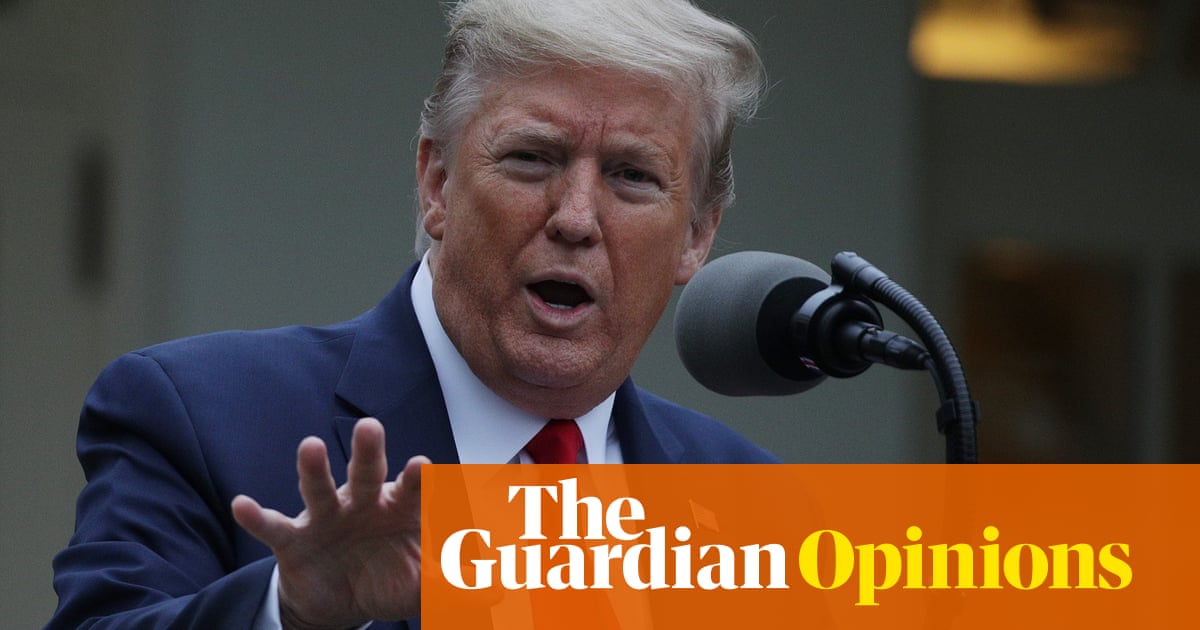 In a parody of self-destructive nationalism, Donald Trump yesterday decided that an unprecedented global health emergency was the perfect time to withdraw American funding from the organization whose job it is to fight global health emergencies. His decision to suspend contributions to the World Health Organization is an extraordinary act of moral abdication and international vandalism at a time when the world desperately needs to find means of working together to combat an unprecedented global threat.

Global problems require global solutions. Covid-19 does not respect borders even closed ones and its continued transmission anywhere poses a threat to health everywhere. We are still in phase one of the crisis, in which countries are mostly focused on containing the initial wave of domestic outbreaks. If these efforts are not to be in vain, then intensive international cooperation will be needed to get expertise and resources to where they are needed most especially as the disease takes root in impoverished countries in the Global South.

The WHO is the only organization in the world with the network and expertise to effectively perform this task. And there is ample precedent of the organization delivering results even amid geopolitical conflict and tension between the worlds leading countries. In the 1960s and 70s, the United States and the Soviet Union worked together to provide the WHO with the resources it needed to eradicate smallpox, a disease which afflicted about 50 million people a year in the early 1950s and no longer threatened humankind at all by 1977.

Smallpox was a very different disease to Covid-19, but the worlds successful eradication of it demonstrates what international organizations can accomplish when governments decide to put geopolitical squabbles and petty politics aside to solve a problem which threatens them all. For the richest country in the world to decide to use its power, wealth and influence to actively undermine rather than lavishly support such efforts today is an act of moral blindness with few parallels in recent American diplomacy.

A lack of international cooperation in the fight against Covid-19 risks repeating the mistakes of the Great Depression, when many countries put up trade barriers in a misguided attempt to protect their own economies. The result was even greater economic devastation for everyone, and a collapse in international trust. By comparison, the international response to the global financial crisis of 2008 was coordinated and effective, lessening the impact of the economic shock. Today the world faces an economic crisis which may rival the Great Depression and a global health crisis unlike anything in the history of modern globalization, and its response looks much more like the 1930s than 2008.

The fact that Trumps decisions are being driven so transparently by his petty domestic political problems suggests that the world shouldnt look to Washington to provide responsible leadership any time soon. Trump now blames the WHO for being insufficiently critical of Chinas early response to the virus, but he himself praised Chinas cooperation with the WHO and separately lauded Beijing as recently as the end of March before he started taking a battering in polls and needed ways to explain away his own failures. A president who used a daily public health briefing to show a propaganda video praising his own response to the disease is not one thinking in the visionary global terms needed to address this crisis.

The Trump administrations nationalism and short-sightedness is particularly concerning as the world moves into the next phase of the Covid-19 epidemic, when many countries are past the initial wave and have the time to consider the situation beyond their own shores. If governments decide to myopically focus purely on their own domestic situations instead even perhaps hoarding medical supplies to hedge against future waves of the infection then they risk allowing a tragedy to unfold elsewhere and ultimately return to their own shores.

History teaches us that the sort of collective action needed to address this crisis will not just emerge spontaneously it must be built painfully, step by step, by countries who trust one another and are able to look beyond their own immediate interests. It often requires a trailblazer who is willing to take the risk of acting first and counting on bringing others along. Previous presidents realized that with Americas great power came great responsibility, and often rose to moments like these or at least attempted to.

Yet the current occupant of the White House has spent his entire term torching international partnerships, trashing Americas reputation as a responsible and trustworthy actor in world affairs, and making it clear he has no interest in accepting the responsibility which comes from being the leader of the richest and most influential country in the world. He wants to make America great but his conception of greatness would be unrecognizable to every other post-war president. If international vandalism is all he has to offer in the face of the greatest global crisis of a generation, then the world we inhabit might soon be, too.