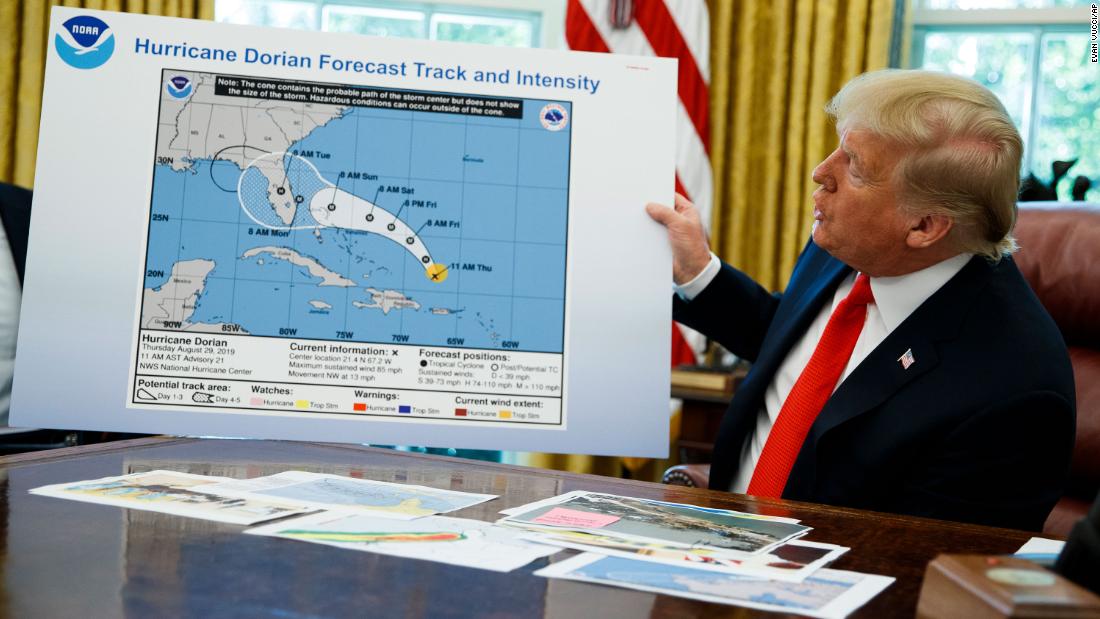 In short: This embarrassing episode was even worse than it seemed last week. According to the Washington Post and The New York Times, Trump personally pressed for his government to retroactively declare his lies to be true. And NOAA sort of did! In other words, the Trump White House politicized the weather report and drew attention away from the East Coast, where Dorian was actually a threat, to Alabama, where the sun was shining.
Trump makes dozens of false claims a week. CNN’s team counted 38 last week. But Alabama is different because it involves an emergency situation and it involves federal agencies we’re all supposed to be able to trust. So here’s why this story should be back in the news:

First the NYT came out with a story that said Mick Mulvaney pressed commerce secretary Wilbur Ross “to have NOAA publicly disavow” NWS Birmingham’s accurate statement that Alabama was safe.
Then the WaPo one-upped the NYT with a report that Trump himself “pushed staff” on the matter. Later in the day, the Times matched the Post’s reporting. Both papers are running their stories about this on Page One on Thursday. And good for them — as storms go, this is a severe thunderstorm, not a scattered shower.
Here is the Post’s lead: “President Trump told his staff that the nation’s leading weather forecasting agency needed to correct a statement that contradicted a tweet the president had sent wrongly claiming that Hurricane Dorian threatened Alabama, senior administration officials said. That led White House acting chief of staff Mick Mulvaney to call Commerce Secretary Wilbur Ross to tell him to fix the issue, according to the officials…”

“This is now an 11-day story,” The Post’s James Hohmann tweeted, “because Trump couldn’t admit he made a small mistake and, instead, the gears of government were turned in an attempt to cover for him. Trump’s inaccurate tweet was posted on September 1 at 10:51 AM. He could have corrected it and moved on by 10:52.”
That’s exactly right. That’s the point. At the time Trump said Alabama “will most likely be hit (much) harder than anticipated,” he was simply wrong. There’s no scientific way to say he was right. But he tried anyway. And that’s a disturbing misuse of presidential power.
As Thursday’s NYT story notes, “the furor over Mr. Trump’s storm prediction has evolved from a momentary embarrassment into a sustained political liability for the administration — no longer just a question of a president unwilling to admit a mistake but now a White House seemingly willing to pressure scientists to validate it.”

The Post’s Thursday story ends with this fact: “Meanwhile, a new tropical weather system is brewing, and this one may actually hit Alabama.”
Read more of Wednesday’s “Reliable Sources” newsletter… And subscribe here to receive future editions in your inbox…

“Human nature, like journalism, is deadline-¬oriented,” TIME EIC Edward Felsenthal writes in this week’s letter to readers. “Our intent with this issue—only the fifth time in our history that we have turned over every page of a regular issue, front to back, to a single topic—is to send a clear message: we need to act fast, and we can.” The full issue dedicated to climate will come out Thursday morning… After 7am ET, it’ll be live at this link...
Of note: Felsenthal says in his editors’ letter, “what you will not find in this issue are climate-change skeptics. Core to our mission is bringing together diverse perspectives. Experts can and should debate the best route to mitigating the effects of climate change, but there is no serious doubt that those effects are real. We are witnessing them right in front of us. The science on global warming is settled. There isn’t another side, and there isn’t another moment.”
→ Speaking of special climate issues, here’s the Variety mag cover story I previewed earlier in the week…